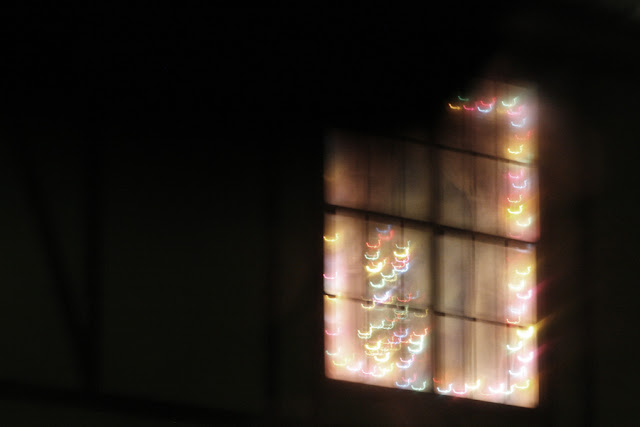 Mid-November:
I came so close to hitting him, me in the Jeep, him on foot. He was black, the night was black, his clothes were black, the streetlight sputtering into nothing. I stopped at the stop sign and when I turned to my left to check for traffic, there he was, in the middle of the street, standing thisclose to me, stopped right outside my driver's side window, just inches away, staring, surprised. The weak light lit his wrinkles and, no doubt, mine, and I waved him on, my heart skittering off in different directions. He disappeared into the darkness with just a step or three, and it was only much later I wondered if he was real. If he was a ghost. An angel. We'd stared into each other's eyes and each taken a breath, a big one, and I'd said to him through the closed window I didn't see you, and I could see in his eyes he understood and trusted me enough to walk on by. We were the only people on the road and then he was gone.

suddenly i want the big paintings in the house gone. they take up too much light and too much space and the rooms feel toosmalltoocrowdedtoosmooshed. i want less and less and less, except for the small stove that is on its way here. which, in truth, means less in the kitchen, means the tossing of things, the rearranging, re-figuring. means one bowl cakes made from scratch and less store bought. means finding my way back to caring for me.

The Saturday after Thanksgiving, which we shared on Wednesday:
the blinds across my glass door are broken and cannot be raised more than a couple of feet from the floor, and i cannot find an affordable replacement online, and certainly nothing in this town. they are opened to stripes of light and getting in and out of the house is an annoyance. i feel enclosed, but it is what it is, and it is fixable, just not today, not this weekend. it explains the no-big-paintings mood, the ache for more sleep. it is a lonely november and the yard is full of leaves, brown, still damp from rain earlier this week.  the air has a bit of chill but the door is open behind those blinds and my feet are bare.

Sunday, the first day of Advent, is cooler.
the month is winding down, as am i. i've spoken to one person, for one short conversation, in 4 days. i move the furniture around and cannot get it right. tell myself i need to scrub the kitchen floor, but don't. use candles in the rooms where lightbulbs have gone out. let the laundry pile. i fall asleep early and awaken after midnight. i should be a poem.

December:
i lost a thursday night in the traffic coming home from the christmas parade, and only found it later when my brother mentioned something about the cowboys and i realized i'd missed the game. the air stayed warm until it didn't, until just a few days ago, when the wind showed up with winter on its breath. it was loud and blustery, and sounded like rain, and i dreamed a big black bunny was sprawled across a bed in my house, his smiling eyes following me around the rooms.

we are almost done, this year and i.


"I need a holiday, a very long holiday"
~ Bilbo Baggins

Email ThisBlogThis!Share to TwitterShare to FacebookShare to Pinterest
Labels: continuation, my map